cancel confirm NSFW Votes: (0 votes)
Are you the publisher? Claim or contact us about this channel.
0
Showing article 11612 of 12136 in channel 6088585
Channel Details:
Viewing all articles
Browse latest Browse all 12136
0
0
Proceedings of the 29th International Congress of Papyrology - 2021 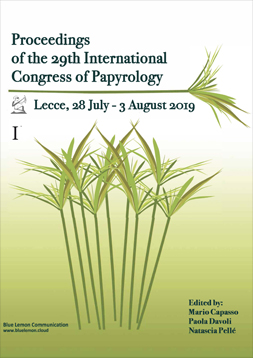 The 29th International Congress of Papyrology took place from 28 July to 3 August 2019 in the city of Lecce.

In the Congress week the papers were presented in thematic sessions, which were accompanied by workshops, panels and posters. A single plenary session was dedicated to the discussion of the Future of Editing Papyri: Aspects and Problems. A total of 285 papers and posters were presented, of which 93 are published here.

The works presented at the Congress covered all aspects of Papyrology. Seventeen sessions were devoted to documentary papyri, five to literary papyri, five to Herculaneum papyri, two to juridical papyri, one to archaeology and papyri, two to Palaeography, two to Christian papyri, three to unpublished collections, one to the history of papyrology, one to Islamic documentary papyri, two to magic papyri, two to experimental sciences, two to conservation and restoration, one to Latin papyri, one to new technologies, two to Coptic papyri; two to ostraka and other supports; one to Arabic Papyrology; two to linguistics of the papyri; two to paraliterary papyri. The most relevant innovations came from the sessions devoted to unpublished collections, to new technologies, and to experimental sciences.

The plenary session Future of Editing Papyri: Aspects and Problems allowed for profitable discussions about the systems of publishing papyri (including Demotic, Arabic and Coptic ones), the access to collections and, more generally, the future of Papyrology .