cancel confirm NSFW Votes: (0 votes)
Are you the publisher? Claim or contact us about this channel.
0
Showing article 11256 of 12110 in channel 6088585
Channel Details:
Viewing all articles
Browse latest Browse all 12110
0
0
The Archaeology of Egyptian Non-Royal Burial Customs in New Kingdom Egypt and Its Empire
Published online by Cambridge University Press:  27 December 2021
Wolfram Grajetzki
Show author detail 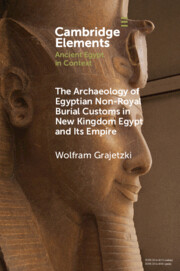 This Element provides a new evaluation of burial customs in New Kingdom Egypt, from about 1550 to 1077 BC, with an emphasis on burials of the wider population. It also covers the regions then under Egyptian control: the Southern Levant and the area of Nubia as far as the Fourth Cataract. The inclusion of foreign countries provides insights not only into the interaction between the centre of the empire and its conquered regions, but also concerning what is typically Egyptian and to what extent the conquered regions were culturally influenced. It can be shown that burials in Lower Nubia closely follow those in Egypt. In the southern Levant, by contrast, cemeteries of the period often yield numerous Egyptian objects, but burial customs in general do not follow those in Egypt.

This Element is free online from 28th December - 11th January