cancel confirm NSFW Votes: (0 votes)
Are you the publisher? Claim or contact us about this channel.
0
Showing article 10450 of 12110 in channel 6088585
Channel Details:
Viewing all articles
Browse latest Browse all 12110
0
0
Ancient Greek Literary Letters: Selections in Translation
By Patricia A. Rosenmeyer 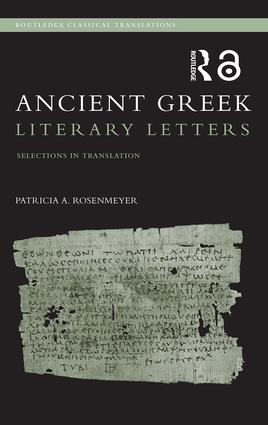 The first referenece to letter writing occurs in the first text of western literature, Homer's Iliad. From the very beginning, Greeks were enthusiastic letter writers, and letter writing became a distinct literary genre. Letters were included in the works of historians but they also formed the basis of works of fiction, and the formal substructure for many kinds of poem.

Patricia Rosenmeyer, an authority on the history of the Greek letter, assembles in this book a representative selection of such 'literary letters', from Aelian and Alciphron to Philostrartus and the supposed letters of Themistocles.

The book will be valuable for all students of Greek literature especially those studying Greek (and Latin) letter.

Letters and prose ﬁctions of the Second Sophistic