cancel confirm NSFW Votes: (0 votes)
Are you the publisher? Claim or contact us about this channel.
0
Showing article 10378 of 12094 in channel 6088585
Channel Details:
Viewing all articles
Browse latest Browse all 12094
0
0
Dutch National Numismatic Collection added to CRRO

The Dutch Nationale Numismatische Collectie, published by De Nederlandsche Bank, is the latest collection to join the Nomisma.org numismatic Linked Open Data cloud. Nearly 2,200 Roman Republican coins from the collection have been linked to Coinage of the Roman Republic Online (CRRO) URIs through OpenRefine, and exported directly into RDF with a template. There are now more than 52,000 Republican coins in CRRO, making it, by far, the most comprehensive research tool for this corpus of material.

A small number (about a dozen) coins have known findspots that were reconciled to Wikidata.org URIs. Using Wikidata's SPARQL endpoint, I extracted coordinates for these places, as well as the entire geographic hierarchy up to the country level, making it possible to begin querying coin finds of the Netherlands in a systematic way. Hopefully the Portable Antiquities of the Netherlands (PAN) will eventually integrate with CRRO and Online Coins of the Roman Empire (OCRE) URIs, painting a more complete picture of the circulation of Roman coins into the Netherlands. 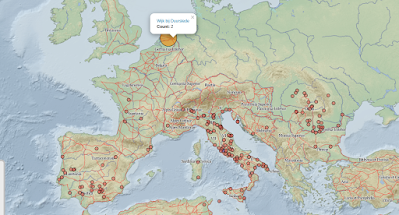 Posted by Ethan Gruberat 8:00 AM