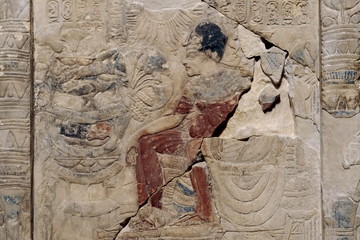 During the 18th Dynasty (1550-1292 BC), the Egyptian New Kingdom pharaohs campaigned repeatedly in Syria and the Levant and established political control over much of the region. As a result of these conquests, the rulers of Levantine city-states sent letters written in the cuneiform script on clay tablets to the Egyptian pharaohs. So, too, did the kings of the other great geo-political powers of the time (e.g., Assyria, Babylonia, Hatti, Mittani). Beginning in the 19th century AD, local farmers and, later, archaeologists working at the site of the one-time Egyptian capital of Akhetaten (modern Tell el-Amarna) discovered remnants of this correspondence, mostly dating to the reigns of Amenhotep III (1390-1353 BC) and his son and successor Akhenaten (1353-1336 BC). Today, the corpus of cuneiform texts known as "the Amarna letters" comprises 346 letters (one actually found at Tell el-Hesi) and four administrative lists (28 scholarly and literary texts were found with these archival texts and probably used in the training of the scribes).

The online edition of the Amarna Letters aims to make transliterations, translations, and glossaries of the letters and administrative texts available to both scholars and the wider public. At this time, the project comprises 218 texts. This number represents the correspondence to and from Egypt's client kings in the Levant, excluding the letters sent from Phoenicia. In our next update, we will add the letters from Phoenicia. In our final update, we will add the correspondence to and from the so-called "Great Powers" as well as the administrative texts related to this correspondence.

Supported by a Catalyst Award from Johns Hopkins University

And see all the ORACC Projects