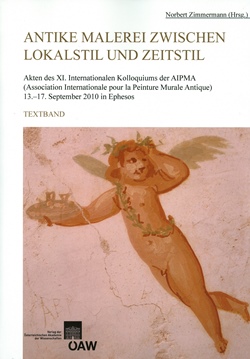 Under the main theme “Ancient Painting Between Local Style and Period Style”, the 11th international conference of AIPMA (Association Internationale pour la Peinture Murale Antique) took place from September 13 to 17, 2010 in Ephesus (Turkey). In a chronologically and topographically diversified lecture program about 150 specialists from 16 nations devoted themselves to the characteristics of period and/or local styles in ancient painting and to the relationship and influence of local styles and traditions. The publication at hand presents the 45 lectures regarding the general topic as well as 17 further contributions on novitates and 40 posters. The contributions focus particularly on those findings that offer a rich stock of materials in a well dateable archaeological context. In these, influences such as special transient trends, local workshop traditions and the personal influence of the client can become especially apparent. Chronologically, the contributions span from the Hellenistic period to late Antiquity, whereby this time, apart from Pompeii, the focus is placed on paintings of the later Roman Imperial period as well as late Antiquity, with studies on central monuments and important new findings. Topographically, all areas of the Roman Empire are covered, from the Vesuvian cities and Italy to Asia Minor, followed by the north-western and eastern provinces, the Orient and Africa. In general, it becomes apparent that up to the mid-Imperial period the terms period style and local style are synonymous which can be used identically and can be traced to the centralistic structure of the Roman Empire and the role model of Rome. However, this changes considerably in later Imperial times and at first glance paintings from Rome (Ostia), North Africa and Ephesus follow different traditions, developments or local workshops with a greater variety of wall partitioning, color schemes and the use of décor elements and picture themes that cannot readily be explained by a joint conception of period style. The thematic contributions are complemented by several high quality and significant new